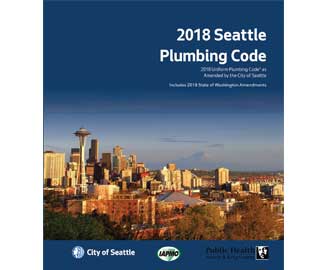 The city of Seattle has formally adopted the 2018 Seattle Plumbing Code (SPC), which is based on IAPMO’s 2018 Uniform Plumbing Code (UPC®), updating from the 2015 edition. It is available for purchase from the IAPMO Online Store.

The 2018 edition of the SPC is a custom plumbing code published for the city of Seattle.  It also protects against hazards that may arise from the use of plumbing piping and systems by regulating and controlling the design, construction, installation, quality of materials, location and operation of plumbing piping systems within the city of Seattle. The code includes the Washington state and Seattle amendments integrated into the 2018 UPC. This edition also includes the new Water Demand Calculator for estimating water supply demand and pipe sizing.

The UPC was introduced in Los Angeles in 1928 and formally published as the Uniform Plumbing Code in 1945. Along with IAPMO’s other codes, it is developed using IAPMO’s consensus development procedures accredited by the American National Standards Institute (ANSI). This process brings together volunteers representing a variety of viewpoints and interests to achieve consensus on construction practices. Developed and subsequently republished at the conclusion of each three-year code cycle, the Uniform Codes are designed to provide consumers with safely functioning systems while, at the same time, allowing latitude for innovation and new technologies.