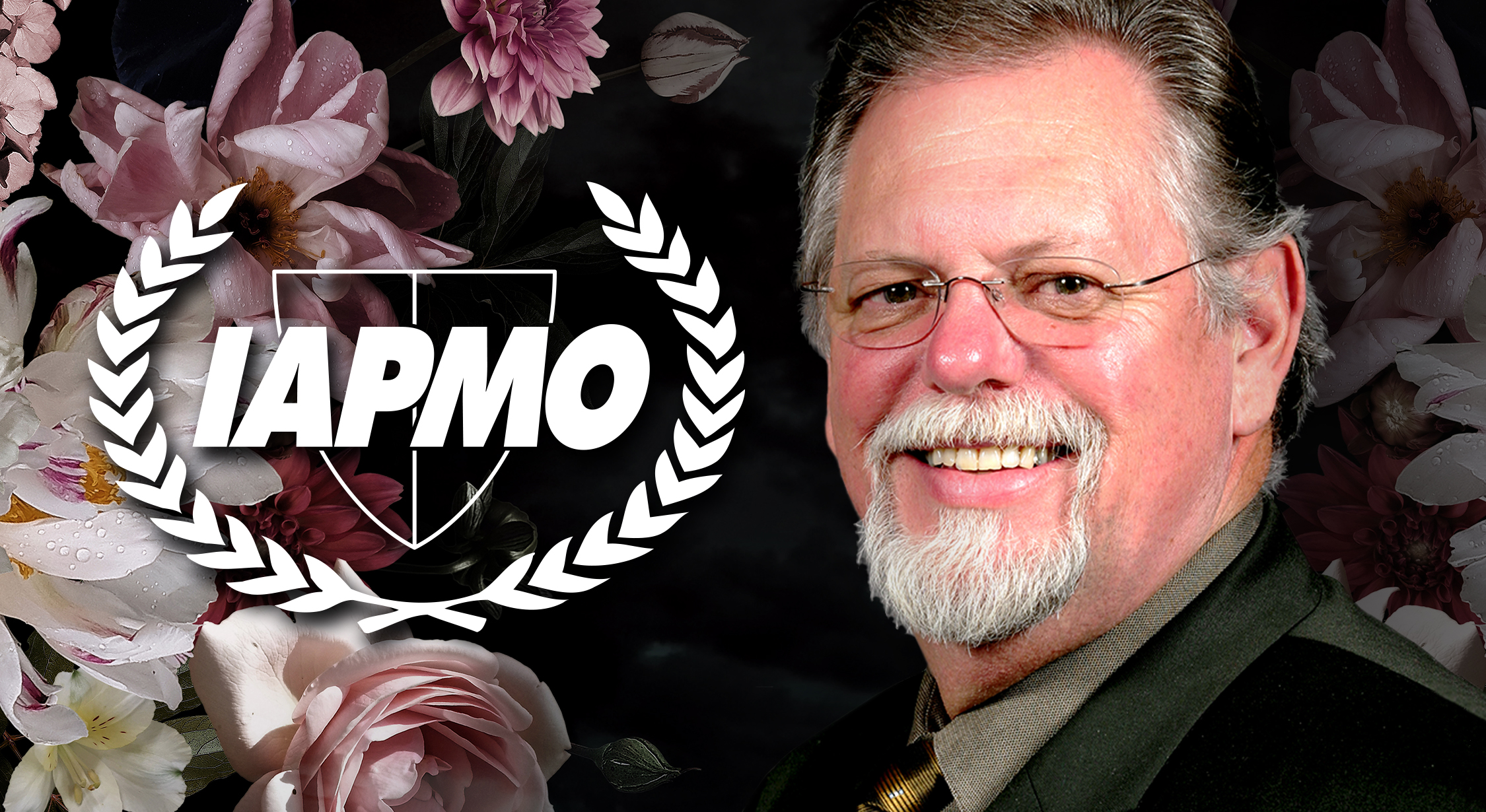 IAPMO mourns the passing of an industry giant and an architect of its highly effective Field Services department Linden Raimer, who passed away June 23 at the age of 75.

Raimer worked professionally in the plumbing and mechanical industry for 45 years, the last eight as IAPMO’s senior director of Field Services, prior to his formal retirement in 2008. Even in retirement, however, he continued to serve the industry as chair of the IAPMO Standards Council, presiding over code development processes until earlier this year.

Born in New Orleans in 1946, Raimer graduated from McDonogh 35 College Preparatory High School and followed in his grandfather’s footsteps by completing his apprenticeship and becoming a master plumber through Plumbers and Steamfitters Local Union 60 in Matairie, Louisiana. Raimer became a supervisor and foreman working on commercial and industrial projects. In 1988, he took the job as chief plumbing inspector for St. Tammany Parish, Louisiana, and served the municipality for 12 years, also as building official and director of permits and regulatory.

Raimer joined IAPMO in 2001 and along with Allen Inlow built Field Services from the ground up, coordinating the efforts of the regional managers in gaining code adoptions, creating and supporting local chapters, and representing IAPMO at various meetings and conventions. He also managed Region 8, including his home state of Louisiana and its neighbors in the southeast.

Raimer married his high school sweetheart, Linda Hampton, in 1965 and they had two children, Bridgette and Linden “Beau” Raimer. He had an insatiable drive for learning, which he poured into his hobbies: raising thoroughbred horses, award-winning Serama chickens, and championship racing pigeons. Raimer also loved traveling and explored the entire world. His favorite destination was Ulusaba, South Africa, where he, Linda, and their closest friends spent their time going on photo safaris. But his favorite place in the world was his home at One Oak Farms in Covington, Louisiana.

Raimer was a practicing member of the SGI Buddhists. He is survived by his wife of 57 years, Linda Raimer; his daughter, Bridgette; son-in-law, Jessy; and his grandchildren, Chase and Trent. Linden was predeceased by his beloved son, Beau Raimer.

Raimer touched many lives through his involvement with IAPMO and many eagerly shared their memories:

“Linden was an amazing ambassador for IAPMO and the industry. He had a unique way of making an instant connection using his sense of humor, genuine interest in people, and passion for the industry. Linden will be sorely missed.”
— Dave Viola, IAPMO CEO

“Linden was a great and kind man who accomplished many exemplary things in his storied career, but I’ll bet he would place all of his friendships within the IAPMO family as No. 1.”
— David Gans, IAPMO president

“One of the best parts of IAPMO is the people — the employees and the very dedicated members and volunteers. When he retired, Linden couldn’t stay away. He continued to work with us in many different capacities. But most important, he was a genuinely good person. He really cared about IAPMO and all that we do, and he cared about the people. I spent many years working with Linden and becoming very close with him and Linda. He had an incredible way of discussing complicated matters in a very simplistic way; and having fun the entire time. I wish I had one more conversation with him, just to hear his voice. I miss him terribly.”
— Gaby Davis, IAPMO chief administrative officer

“To me, Linden was the perfect description of a gentle giant. I met Linden in the early 2000s when I first became involved with IAPMO. I instantly realized that this was someone I wanted to be around and learn from. He had a smooth and calm demeanor mixed with his cool Louisiana accent, but he was also a wealth of knowledge. Every time we spoke the first words out of his mouth were ‘How’re your mom and dad?’ followed by “How’re the kids and the family?’ Speaking with him and learning from
his experience in Field Services and the code development process were two areas of importance in my growth with the organization. A couple of memories I will never forget were ITP week morning breakfast at Bombers with Linden, George Bliss and Sid Stolper, and the time he invited the IAPMO Board of Directors to his place for a crawfish and catfish feed, fishing in his pond and a bonfire. Oh, and there was his trademark wine made from Welch’s grape juice. Rest in peace, my friend. You will be missed but never forgotten.”
— DJ Nunez, executive vice president of Field Services

“Linden Raimer was a friend, a very dear friend. He was smart, devoted to family and his life-long love, Linda. He had many friends throughout the plumbing industry, especially in the UA, as he was a devoted union man. He taught me so much about his beloved union and his many dear friends at UA Local 60. I am sure there are many like me around the country who have been blessed to call Linden a friend and I have had the good fortune to have him as one of my closest friends. It hurts not to be able to call him. I always enjoyed being around Linden as his self-deprecating humor, his intellect and his wit made all encounters worthwhile. I miss him already. RIP, dear friend.”
— Russ Chaney, retired IAPMO CEO

“I first had the pleasure of meeting Linden when he joined IAPMO in January 2001 and for the next 20 years watched with awe and admiration as he displayed an ethos of striving to build consensus in even the most trying of circumstances. Linden personified the idiom ‘to thread the needle (to find harmony or strike a balance between conflicting forces, interests, etc),’ which served as a lodestar for the IAPMO Standards Council during his lengthy tenure on the council as a member and chair. His lighthearted sense of humor served to brighten even the darkest of days and, to me, Linden will be most remembered for showing me the value of building the most inspiring kind of bridges in the world, those between people.”
— Neil Bogatz, retired IAPMO general counsel

“Linden always made sure everyone had the opportunity to speak and be heard. Many times, Linden would stop the conversation to allow someone to speak their mind and provide input. He guided me through many Standards Council meetings and was dependable during the IAPMO Assembly/Association Technical Hearings. I can still hear his voice saying, ‘Hugo, let me know if I am doing this correctly.’ Linden knew that he did not need my guidance, but it was his personality to keep others involved. I am a better person because of him. It was an honor and blessing to have met Linden. I will miss him.”
— Hugo Aguilar, IAPMO vice president of Codes and Standards

“I was a brand-new employee when Linden came to our office. I extended my hand to introduce myself, instead I got a great big teddy bear hug. Words cannot express the fondest memories of the kind, witty, and loving person I knew Linden to be. He always made me laugh. They say laughter is the key to the heart. Throughout the past 30 years of knowing Linden, I can’t ever remember not having the biggest, warmest, welcoming hug with his sweet southern drawl, ‘How ya doin, girl? Let me tell you about my animals.’ Linden was a truly honest man, and he meant what he said. I loved that about him. Linden was one many considered an ‘all-time great.’ I considered him an amazing friend. Linden’s warm heart will be missed by me and so many others.”
Tricia Megee, IAPMO vice president of membership