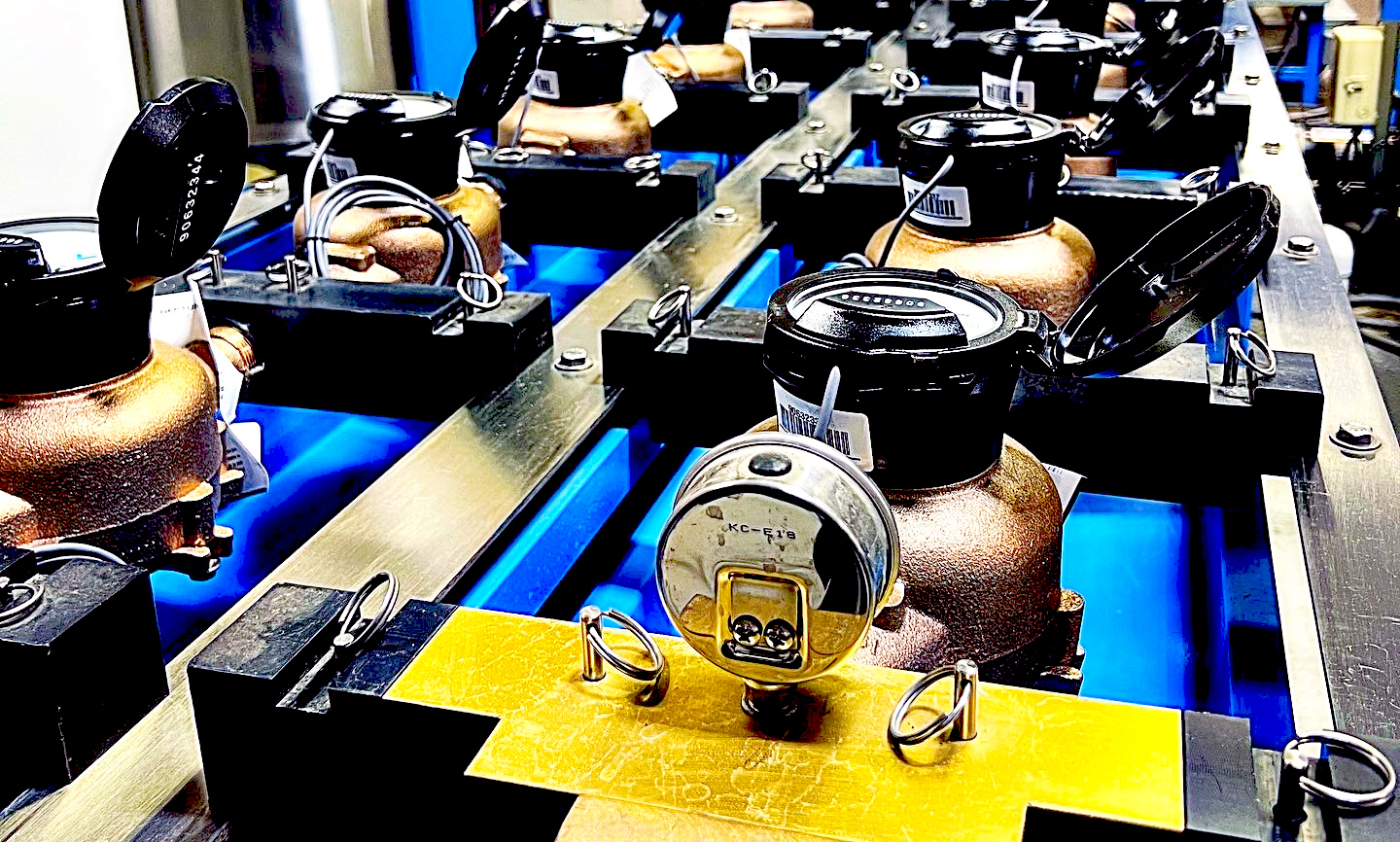 Homeowners and business owners routinely receive a bill in the mail for the water the occupants used over the preceding billing cycle. That amount was measured by a water meter attached to the residence or building. But how do they know whether they can trust that meter?

Thanks to testing benches and a new system it recently implemented, Los Angeles Department of Water and Power (LADWP) customers can be confident their bill will reflect actual use as measured by an accurately tested functioning meter. LADWP began using the MARS Test Bench Systems in 2020, replacing test benches that Assistant Water Utility Superintendent Adolfo Sanchez estimated the department had been using since the 1960s.

“They were way out of date,” Sanchez said of the previous test benches. “They were volumetric. These are gravimetric; they use scales to weigh the water. It’s more accurate than volume.”

Official magazine recently toured the water meter testing facility in Los Angeles for a closer look at the important work being performed there.

LADWP makes sure its meters perform as expected before installing them in the field by sample testing the small (up to 1 inch) and intermediate (1 ½- and 2-inch) meters. The size of the meter refers to the service line that is attached to it. The small meters are typically for residential use, while the intermediate serve small apartment complexes and commercial buildings. Sanchez estimated there are about 700,000 of these in use. LADWP tests all the larger meters, of which there are about 7,100, which range from 3 to 10 inches. Those are used for golf courses and larger apartment, industrial and commercial buildings.

“Even though they’ve been tested at the manufacturers, we still want to make sure that we’re getting what they’re saying we’re getting,” he said. “So we test the top layer of every single pallet. It’s very rare that we have something test out of range.”

That range is an accuracy rate of 98.5 percent to 101.5 percent, in accordance with American Water Works Association (AWWA) standards.

Sanchez said handling working with customers who are concerned about the accuracy of their meters is a key responsibility.

“If someone’s stating that their bill is inaccurate, we’ll remove it from the field and put it on our benches, and prove to them that it is accurate,” he said. “That’s one of the other factors that we do. On this bench, we test from 3-inch to 10-inch, which are typically commercial/ industrial meters. On the other benches we test residential.”

“Once he gets his results, he then transfers it to our in-house database,” Sanchez said. “And we keep records of every single test that we run.”

Garcia has been with LADWP for about 12 years, in testing for the past six. He said the new system is much more efficient and easier to use, as it allows him to start a test and then prepare a test for another rack without having to monitor it.

“Before I had to stand here and manually do everything,” he said. “Now I can move on, prep the next rack and start getting that one going. I’m able to move between the three racks and not worry about any overflows or the test going over what it should. Everything is basically done here; that’s the best part.”

The test results are stored in the system, allowing them to be accessed, cataloged, and analyzed whenever necessary.

“We can go back and view any results we’ve had from previous tests,” Garcia said. “We’ll just go to reporting and then, depending on which tests we want to pick out, we can run a report and print out test results for every meter on that test.”

Garcia was also working on the yearly water loss program the day of Official’s visit.

“We’re doing what we call water loss right now, where we pull 1,500 meters out of the ground,” he said. “They’re used meters; they’re different ages, brands, and we test them just to get an idea of what those meters are doing out in the field. Most of those are passing. I am surprised at how well they do, and we actually have a few that are over 10 years old, but they’re all running well.”

Water Service Specialist David Pongvarin was operating the large test bench. He said every large meter is tested, included new ones that come in from the manufacturer before being installed in the field.

“That’s just to verify that what they say falls within our standards is true,” he said. “All meters are tested, and rather than replacing a large meter — because it’s difficult to do and it’s expensive — we replace the upper measuring element, the UME.”

Pongvarin then pointed to the test body of a 6-inch meter that recently came in from the field. “Once it comes in,” he said, “all the parts are going to be taken out. It’s going to be sandblasted and then new parts are installed. And this is one that has already been refurbished, and it’s tested again before it goes out; it has to fall within the 1.5 percent, plus or minus.”

Pongvarin said the new benches allow him to test up to 10-inch meters, whereas the old one only allowed 3- and 4-inch meters to be tested. “Everything else was previously tested in the (San Fernando) Valley,” he said. “And then they would send over the upper measuring elements and the new meters over to me once it’s tested over there. But now I can test anywhere from 3-inch up to 10-inch meters.”

Environmental Engineer Val Amezquita said when one of the meters out in the field breaks down or is not reading correctly, LADWP sends someone out to replace or repair it, bringing the old one back to the shop to test its accuracy.