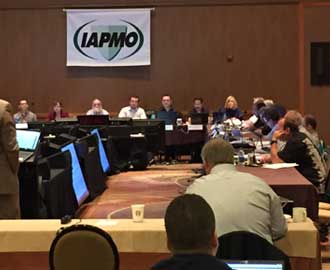 The task group’s goal is to create a Hydrogen Fuel Gas Piping Appendix to be added to IAPMO’s Uniform Plumbing Code (UPC®). This is in line with IAPMO’s effort to continue making the UPC the most technical, flexible and customizable plumbing code available to jurisdictions in the United States.

Direct your web browser to https://forms.iapmo.org/iapmo/committee/app_innovation_taskgroup.aspx and select the fourth task group option for hydrogen in order to sign up. The deadline to apply is June 30.

“As hydrogen will soon be deployed around the world as an environmentally friendly major energy source, it is essential that the material used to convey hydrogen is subject to appropriate standards for safety, durability and resistance to corrosion,” IAPMO Oceana Managing Director Paul Bonsak said. “By establishing this task force, IAPMO is assisting the world in its goal to achieve carbon neutrality and ensuring that communities are safe along with the practitioners who are responsible for installing and maintaining hydrogen gas piping.”

The task group will work on developing the following content within the new chapter, including:

Task group members will participate via conference call or web meeting, provide their perspective on the code, and assist in drafting recommendations for action by the UPC Technical Committee and other medical gas industry codes, standards and guidelines. Applicants are not required to be UPC Technical Committee members. It is anticipated that all meetings will be virtual, but if travel is required, meetings would be held at IAPMO World Headquarters (West) in Ontario, California.

“As the hydrogen industry continues to grow, United Association members are poised to continue our work rebuilding and modernizing our nation’s infrastructure. The UA and IAPMO are taking a strong step forward with the creation of this task group to establish a comprehensive, flexible, and uniform code for the future of hydrogen piping work,” said Tom Bigley, director of Plumbing Services for the United Association. “This working group will ensure that robust quality and safety standards are in place for hydrogen piping, meaning safe jobsites and the highest quality product for end users. The entire United Association looks forward to the important work done by this hydrogen task group and to continuing our work in the industry.”